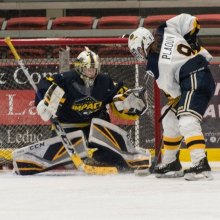 Olivia is an honours student and resident of Spruce Grove; 2019/20 is her first year with NCI and looking forward to an excellent season including a trip to Wickfest. Also known by her nicknames, Vator or Davey, Olivia played Bantam female hockey as an underage player last year, recording 16 shutouts in 44 games with more than 1500 shots as her team’s only goalie. She is extremely competitive with everything including sports, school, board games and her twin brother, and 2 older sisters. She enjoys playing basketball, badminton and juggling and loves Turtles. Olivia has been fortunate to have been able to play elite spring hockey with several female teams including most recently the Alberta Pride 2005 team, as well as the Northern Alberta Selects 2006 Boys AAA team. She is hoping to find a new team for this spring as her previous team has disbanded with a couple of girls moving to other provinces. Fun fact: Olivia endured a 47 minute wall-sit during a PGI goalie camp because she was not willing to give up top spot to another goalie.

There are currently no upcoming tournaments. Please check back again!