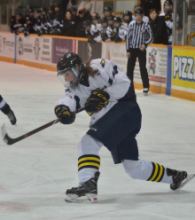 Tyra is one of four returning players to North Central Impact Bantam Elite this season.  She had a very successful 2018/2019 season, finishing 10th overall in points in the AFHL – the highest ranked 2005 player.  Her personal performance peaked in the Playoffs and Provincials, contributing to NCI’s commendable 1st place finish in the North, and 2nd place finish in Provincials.  She was selected to compete for the North in the Alberta Challenge, and ended the tournament tied for 1st place overall for goals scored.  Tyra was subsequently invited to the University of Alberta Elite Prospects Camp and to the Team Alberta U16 Camp, both of which she attended and thoroughly enjoyed.  In the spring, Tyra plays with the 2005 Wescan Spartan Outlaws Super Elite showcase team, and is looking forward to travelling to Edina, Minnesota for the North American Female Elite Showcase in June 2020.  When she’s not playing hockey, Tyra enjoys playing volleyball, basketball, badminton and lacrosse.  She also loves skiing and snowboarding.  Tyra lives in Spruce Grove, Alberta with her Mom, Dad and twin brother, Logan.  She is currently in grade 9, is an honors student, would like to be a physiotherapist and eventually, a hockey coach.

There are currently no upcoming tournaments. Please check back again!